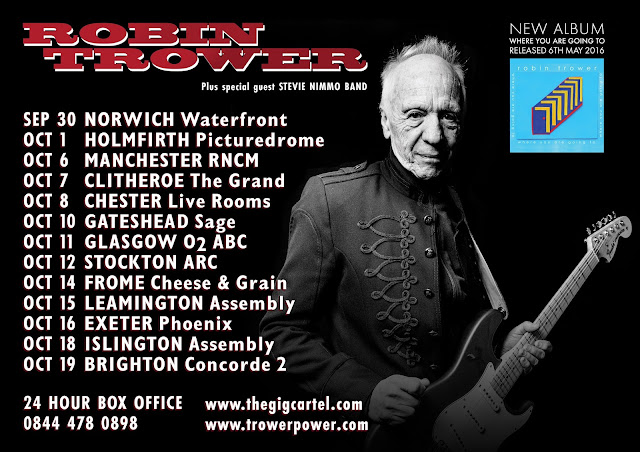 Robin Trower's creative and unique guitar playing powers are still in evidence with each concert tour and album. His musical vision, abilities and passion continue to astound me. Just when I think Robin may run out of stamina and ideas - the guy is seventy-one: yes, yes, but how does he do it? - along comes 2016. A year which finds Robin in the middle of a US tour, releasing a new studio album "Where You Are Going To", and undertaking a UK tour in the autumn. On another level, some reviewers and critics of Robin Trower and his music are so rapt in nostalgia and comparisons with other musicians' that their writing shows an inability to think deeply, to pay attention, to listen. Perhaps 'they' should grow a pair of ears, or get a job at a local theatre selling ice cream; doing something they may have an inkling about.

Robin Trower opened his current US tour in Fort Lauderdale, Florida on 30 March 2016. Customarily his many fans were out in force to welcome and witness a great musician and gifted guitar player in live performance. It is gratifying to read that Robin and his band - Richard Watts (bass and vocals) and Chris Taggart (drums) - are getting a great reception at each concert and that Robin is still playing with passion, spirit, power and eloquent phrasing. Music should move you to the core of your soul and I, like many others, prefer an artist who plays with sheer emotional power over an artist who plays with technical perfection. It helps your brain to breathe. The tour will help to promote the new studio album "Where You Are Going To".


Robin's new album is steeped in history, emotions, the human soul, reflection and introspection. The music is finely blended, as it has been since the early 70's, and goes down easy. Undoubtedly, Robin is going through a powerfully creative phase in his career and I believe that the new studio recordings deserve critical praise. The music, melodies, arrangements, lyrics, guitar parts/tones, solos, drummer Chris Taggart, and the production combine to create a fresh and emotional soundscape. Any reservations I may have had regarding Robin's vocal and harmony abilities have been dispelled on this record. "Where You Are Going To" has all the resonances of Robin Trower's best work. Buy the album and catch him in concert while you still can.