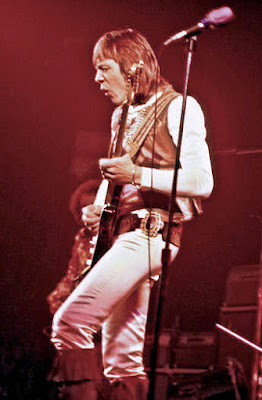 I travelled from Belfast for my third gig of the 2005 tour - I have a very understanding wife. While collecting my ticket mid-afternoon at the venue I was delighted to meet Laurie Brace, Road Manager/Sound Engineer for Robin Trower, and Steve Russell, Backline. We discussed the success of the European tour, the high standard of musicianship of the band, the great sound balance at the gigs in Manchester and London, and their respective backgrounds in the music business. It was great to talk to them and a pleasure.

The venue doors didn’t open until eight o’clock. I was fortunate, however, to meet John and Martin from London who both helped the wait in the queue to be enjoyable even though the weather was quite cool. When the doors opened we made straight for the area in front of Robin’s pedals and stayed there throughout the gig.

Robin and the band took to the stage unannounced and for over one and a half hours captivated the audience who burst into bouts of applause and yells at the end of each solo, and sustained appreciation for the quality of the playing and material throughout the concert, even though it was apparent it was very warm for the group on stage. After the obligatory opening flurry of notes by Robin, the band started into "Too Rolling Stoned". It was apparent the band was again in great form and fully in sync with each other throughout the set.

Robin again demonstrated his capacity for incorporating impromptu licks in his guitar solos’ throughout the set. This is refreshing as some “major league” guitar players are content (restricted!) to reproduce in meticulous fashion at each concert every lick and guitar solo played on the original recording. This, in my humble opinion, makes the music generally lack - to a degree - a certain critical factor, namely ‘soul’. Even at the age of sixty there is no doubt Robin’s playing has reached a superior level, even exceeding his earlier periods in the 70’s and 80’s. It is, however, still delivered in his unique soulful and bluesy manner, evidenced by his formidable vibrato, awesome string bending, facial contortions (mostly with his eyes closed) and tremendous guitar tone.

The songs of the new album, particularly, “What’s Your Name”, “Another Time, Another Place” and the title track “Living out of Time”, went down a storm. I was slightly disappointed Robin didn’t include “Ain’t Gonna Wait” and “I Want To Take You With Me” from the new CD, but maybe in the Autumn (Part 2 of tour) ...?

Other highlights included a great version of “Rise Up Like the Sun” with Robin playing a great wah solo; a soulful and bluesy “Daydream”; “Day of the Eagle” and “Bridge of Sighs”. Robin played some outstanding blues licks on “I want you to love me” supported by Dave’s strong bass lines and great drumming from Pete. Once again the band finished with a blistering version of a “Little bit of Sympathy” and left the stage to well earned applause and shouts for more. The smaller type venue is definitely more intimate for Robin, his band, and the fans, and the atmosphere was electric at times. The encores included “Come to Me”, and “Secret Place” which proved a fitting end to the concert with its jazzy, bluesy chords and tempo. Robin’s guitar playing was at times amazing and truly emotional during this instrumental.

I would like to thank Robin, the band, and crew, for a memorable concert. I spoke to Robin afterwards and told him he should be proud of the standard of the songs on “Living Out Of Time”. I bought the re-mixed CD at the venue and got the whole group to sign it.

I would also like to thank Dylan and the staff of The Brook who were obliging beyond belief, and helped me obtain a poster, meet with Robin and the band, and obtain autographs. Indeed, a great venue in all aspects. Cheers to you all. Might see some of you on the second part of the 2005 tour in the Autumn. Here’s hoping it comes off.
Posted by Ronnie Kerrigan at 23:30