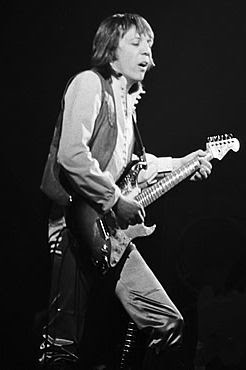 To escape the freezing dark air of Bristol I had a few drinks in the Seven Stars - a pub blessed with warmth and character, pleasant bar staff, and fellow Robin Trower fans’ seeking heat and refreshment prior to the gig being held literally next door. It was great to meet fans from South Wales; sadly I forget their names - great conversation about Robin, his guitar playing, his music and contemporaries.

As the crowd waited to gain access to The Fleece I talked to Laurie Brace, Sound Engineer for Robin Trower (always has a warm welcome) about the recent gigs. The venue had character and intimacy, and an appreciative crowd assembled as Robin, Davey, Dave and Pete took to the stage shortly after nine.

From the opening chord sequence of "Twice Removed From Yesterday" it was apparent the sound was superior to the recent gig I had attended in Cambridge with my brother. Every instrument could be heard clearly, including Davey’s vocals, and Robin’s guitar tone sounded smoother - less harsh - and definitely not as piercing.

The song "Hannah" has proved a crowd favourite on this part of the tour with Robin playing in his usual soulful manner, supported by Dave’s harmonious stellar bass lines, great drumming from Pete, and incredible vocals from Davey. The change in tempo mid section enabled the band to descend into a great groove along with the audience.

It takes a live gig to see and hear how the members of the band crystallize, emotionally and musically; something I am sure Robin appreciates. It obviously elevates his playing as evidenced by his solos tonight. "Fine Day" sounded great with its beautiful chord structure and rhythm which enabled Robin to solo with intensity and passion. Shame Robin wasn’t using the Mu-tron II on this song tonight; a great chorus / wah pedal which gives chords extra depth and punch.

Other highlights were "Another Time Another Place" which highlighted Davey’s passionate vocals; "Too Rolling Stoned"; "Bridge of Sighs" and "Go My Way". The encores included "Lady Love" and "Daydream".

I must confess I missed "What’s Your Name" and "Living out of Time" from the set list. To summarise - great musicians; great music; great sound; astounding guitar playing and a great night. A big thank you to the group and crew for delivering the goods on this tour once again. I was drained at the end – where do these guys get the energy from? Long may it continue.
Posted by Ronnie Kerrigan at 14:21


That is really attention-grabbing, You are an overly professional blogger. I've joined your rss feed and sit up for searching for extra of your great post. Also, I have shared your web site in my social networks google mail sign in