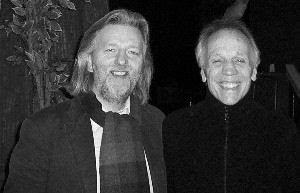 This was special - why? - it just happened to be my birthday, so tickets, flights and accommodation were booked well in advance. My wife and I flew from Belfast the day before the concert. I must admit I still felt slightly exhausted following the Bristol concert - but hell it was worth it. On the day of the Leeds concert I regained my energy and as the clock ticked by my eagerness to witness again the finesse of the Robin Trower Band in concert heightened by the minute.


There has been immense hype in the media regarding the purported musical highlights of 2005: the reunion of ‘Cream’ (tickets selling beyond face value for as much as £1,500; no room for genuine fans unless immensely lucky - mostly corporate sycophants sitting in the front stalls, as with other major music events held these days), and ‘Live 8’ (worthy cause - all form, but modest musical substance).

For quite a few music fans in the UK a main highlight has been the return of one of its 'unsung heroes' to the live circuit in the personage of Robin Trower on the ‘Living Out Of Time’ Tour. Just don't rely on the music press - including guitar magazines - to inform you. This tour has confirmed that Robin should be recognised as one of the top guitar players of all time (up there with Clapton, Page, Beck, SRV, and the greatly underrated Rory Gallagher). Robin is a guitar master with a unique and distinctive sound, and inspired song writing ability. 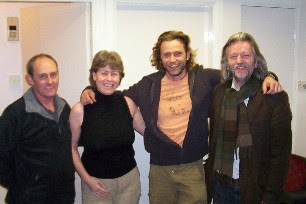 Sylvia and I went by taxi to the venue and when the doors opened made straight for the front of the stage and met Laurie Brace, Sound Engineer for Robin Trower, and Steve Russell, Backline. These guys have been instrumental in ensuring Robin, Dave, Davey and Pete have achieved the sound and success this tour has generated, and it has been a pleasure meeting them; their friendliness and banter at each venue I attended has been greatly appreciated. Prior to the show we went to the dressing room and had a picture taken for posterity – whoever Prosperity is?

I noticed Robin’s amplification had been augmented on stage with the addition of two Leslie Cabinets to enable Robin to hear his guitar clearer, and to facilitate a better sound balance for the whole band. I felt he had played too loud at the Cambridge gig and this had impacted on the overall performance on the night.

Shortly after nine the band took to the stage and the crowd moved forward to the front of the stage. The atmosphere was electric and it was obvious from the opening chord progression of ‘Twice Removed From Yesterday’ that the sound balance was superior to the Cambridge and Bristol gigs I had attended lately - also the tone of Robin’s guitar. The crowd was totally mesmerised from the start and each instrument could be heard clearly, even Robin’s voiced parts during the song were audible.

I must admit I prefer the band opening with ‘Too Rolling Stoned’ as it enables the crowd and the band to get into a hypnotic groove early in the concert. But everyone has their favourite songs . . . including Robin. ‘Hannah’ again proved superlative with Robin playing beautiful arpeggios during the chord sequences supported by Dave’s ‘stellar’ bass lines (sounding Newtonian at times!), strong drumming from Pete, and great vocals from Davey (which tonight could be heard clearly). This definitely made the gig more moving and enjoyable.

I was slightly disappointed ‘What’s Your Name’ and ‘Living out of Time’ had not been included on the set list again – perhaps more flexibility with the set list would be a plus for the group and the fans on any future tour(s) . . . only planting seeds; The Fool and Me; Alethea; Secret Place. This, however, was compensated by the inclusion of ‘Fine Day’ - song writing at its best; and incredible lead playing during the solos.

The version of ‘Bridge of Sighs’ tonight was breath-taking and the solo fully highlighted the formidable vibrato, awesome string bending, and tremendous guitar tone which Robin possesses - truly emotional with melodic phrasing. The experience is augmented by the smaller type venue which, on this tour, has proved intimate for Robin, his band, and the fans, giving the atmosphere an electric charge not facilitated at larger venues.

Next was the instrumental ‘Islands’; a melodic masterpiece which enabled the trio of Robin, Dave and Pete to take the concert to a different emotional level. Another great song live is ‘Rise up like the Sun’ which allows Robin to solo over a great rhythm provided by Pete and Dave. Robin’s soloing once again reaching heights of raw emotion and soulfulness simultaneously - a joy to behold.

Other highlights included ‘Victims Of The Fury’; ‘Too Rolling Stoned’ ‘Go My Way’; and ‘Another Time Another Place’ which highlighted Davey’s excellent vocals and Robin’s beautifully placed fill-ins. The encores included ‘Lady Love’ and ‘Daydream’.

On the night Sylvia and I agreed ‘Daydream’ was in a class of its own due to the crystallization of the band emotionally and musically - something I am sure Robin appreciates – it enables him to let his guitar soar ever higher in search of that ‘buzz’ which somehow bonds with the audience. A truly memorable night. It is obvious Robin likes to play live and hopefully this band will tour in 2006 . . . just keep the fingers crossed.

Afterwards I bought the DVD and had it signed by the band. A lot of bantering, humour, and laughing on the night after the gig as evidenced by the subsequent photographs. A big thank you to Robin, Dave, Davey and Pete; also Laurie and Steve, for making my birthday special, and also the concerts I attended in Manchester, London, Southampton, Cambridge, Bristol and Leeds. It has been an adventure full of great memories, and fantastic music played by superlative musicians. 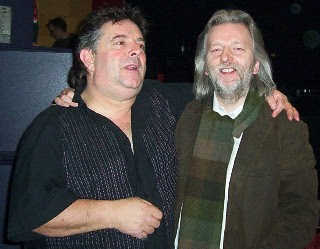 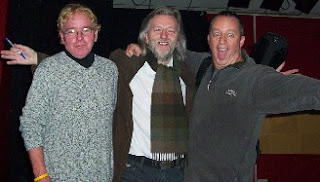 The Three Tenors aka Davey, Ronnie and Dave – 'Who said vaudeville was dead?'

Set list: Twice Removed From Yesterday; Hannah; Roads To Freedom; Fine Day; Islands; Day Of the Eagle; Bridge Of Sighs; Rise Up Like The Sun; Victims Of The Fury; Too Rolling Stoned; Go My Way; Another Time, Another Place; Little Bit Of Sympathy; Encore: Lady Love; Daydream

Posted by Ronnie Kerrigan at 23:58