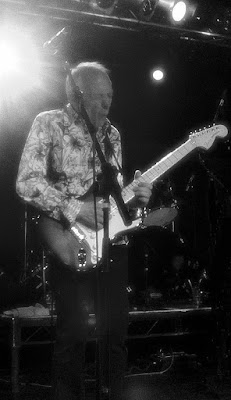 I was fortunate to attend tonight’s concert at Manchester Academy with my wife, Sylvia, and daughter, Emma, to witness a triumphant performance by Robin Trower and his band; Dave Bronze on Bass, Pete Thompson on Drums, and Davey Pattison on Vocals.

The Academy’s acoustics, atmosphere, crowd and musicianship of Robin and his band provided the perfect ingredients for a truly memorable concert.

In his 61st year Robin has undoubtedly made his presence felt once again in his native homeland. He is not just a superlative master of the guitar; he is a first rate musician and songwriter. It should be evident by tonight’s reception that Robin enjoys a harmonious, loyal and appreciative fan base across the UK.

The seminal works, aka, "Day of the Eagle," "Bridge of Sighs," "Daydream," "Hannah," "Islands," and "Too Rolling Stoned" were absolutely breathtaking tonight. The band were perfectly in harmony, and appeared to play with renewed energy. Robin’s atmospheric and distinctive sound, combined with his unique soulfulness and emotion, and the musical intimacy of the band, combined to make this an awe-inspiring concert.

Robin’s music continues to somehow grab your heart and reside within; comparable to a close companion of honest warmth and integrity. Robin is a true contemporary of, Beck, Page, Clapton, Green, SRV - in effect, any guitarist you wish to a name. Those fortunate to attend tonight’s concert seen, heard, and witnessed an artist in full flight; liberated, and at the pinnacle of artistry.

Thanks to Robin, Davey, Dave, and Pete, for contributing to a great performance; also Steve Rusell and Laurie Brace - two genial guys who help to ensure the equipment and sound are at their best.

It was great to meet Steve Shail for the first time; Alan Howard who is always gracious and passionate about the music; David Knight and friend Tony Roberts, who I last met at Robin’s gig at the Life Café in the same city in March 2005.

Set List: Twice removed from Yesterday; Hannah; Roads to Freedom; Too much joy; Islands; Day of the Eagle; Bridge of Sighs; 20th Century Blues; Victims of the Fury; Too rolling stoned; Go my way; Another time, another place; Little bit of sympathy. Encores: Lady Love; Daydream
Posted by Ronnie Kerrigan at 12:59