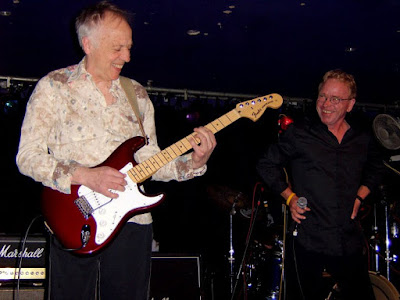 Robin Trower and his band of "merry" men, Davey Pattison (vocals), Dave Bronze (bass), and Pete Thompson (drums) - it was Robin Hood territory after all - took to the stage at 9.00 pm and adorned their armaments ready for battle. The venue, while compact, proved an excellent setting to see Robin and the band up close and personal. To paraphrase the late Phil Lynott of Thin Lizzy, "the band were red hot, I mean they were steaming," right from the opening chords of "Twice Removed from Yesterday".

As the set progressed it was evident the stifling heat in the venue was a burden the band would have to endure, which to their credit they did, combining superlative musicianship with the delivery of music of the utmost quality during the entire set. The heat took its toll and the group looked visibly exhausted and drained at the end of the gig.

While the overall sound was extremely loud, Dave's powerful and melodic bass lines, and Pete's drumming finesse were clearly audible in the mix; no mean achievement. It was evident the band were in excellent form, wholly in sync, and intensely immersed in the music.

Proof is in the delivery, and did Robin and the band deliver? Definitely, yes - the version of "Hannah" was excellent; strong bass lines clearly audible with Dave Bronze totally immersed in the music in perfect harmony with Pete Thompson's exceptional drumming; a great rhythm partnership which enabled Robin to layer the song with his unique guitar sound and style. Accompanied by a strong soulful vocal by Davey this song was exceptional on the night.

"Too Much Joy" was pure magic. I though Robin might sing it, but the vocal duties were taken by Davey. It proved to be one of the finest songs with Robin playing searing bluesy licks over a hypnotic tempo; lead guitar playing at its finest - passionate and soulful.

The version of "Day of the Eagle" was powerful, and the best I've heard on the recent UK tours. It would be great to hear a slightly longer play out by Robin in the slow coda prior to starting "Bridge of Sighs" which creates a unique atmosphere to enable Robin to play his guitar like no other musician; soulful, bluesy, and with tremendous feel.

"20th Century Blues" would be a brilliant opening number on this tour (April/May in UK before heading to the US; so catch the band on their current dates) and is clearly going to be a crowd favourite. The riff, rhythm, and solid bass lines make this an ideal vehicle for Robin to use his range of guitar playing techniques. The emotion it generated was clearly visible on Robin's contorted face as he bent his strings in all directions in combination with his formidable vibratos.

The rehabilitation of "Victims of the Fury" is proving popular with Robin's fans. Without doubt the harmonies during the chorus from Davey, and Dave, enhance the song, together with Robin's use of the wah pedal. The solos during the song were paramount to virtuoso guitar playing at its zenith.

Also sounding great and inspired were the versions of "Go My Way" (scorching wah soloing by Robin over a pulsating, harmonized rhythm provided by Dave and Pete ), and "Sweet Little Angel" - blues playing of the highest caliber - a strong rhythm enabling Robin to reach dizzy heights of passion and soulfulness, and Davey to sing his heart out. Truly memorable.

Other highlights were "Too Rolling Stoned" and "Little bit of sympathy". "Daydream" is always first-rate. The heat on stage must have been unbearable and Robin and his 'merry' men definitely earned the applause and adulation tonight.

This tour was promoting the release of Another Days Blues - a brand new album - and the 'Living Out Of Time - Live' DVD and CD from Robin.

Do yourself a big favour - catch Robin and his band on tour while you can, and purchase music that rocks and taps into your emotions. 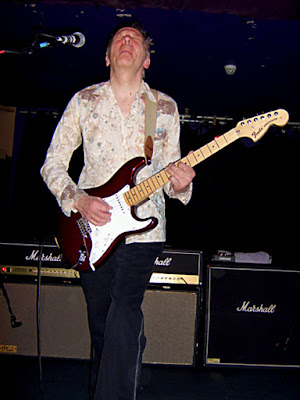 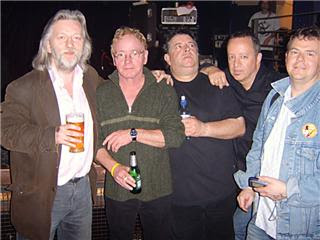