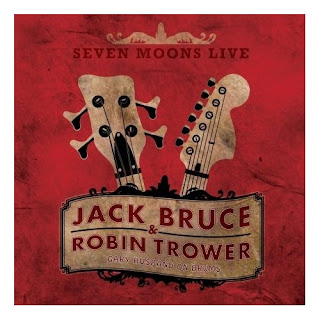 The "Seven Moons" live album is now available to order at Amazon.co.uk. delivered free in the UK with Super Saver Delivery.

It is strange this album is not listed at the official Robin Trower Store - or that Jack Bruce is not included on the "Links" page of Robin's official site. I'm not suprised that "We're Going Wrong" and "I'm Home" are not included on the 'Live' CD - they sounded listless and lacking in atmosphere in concert. Jack's vocal delivery on both tracks was poor live, and I was grateful when both songs ended.

The release of "What Lies Beneath" - in my view - overshadows Robin's recent collaboration with Jack Bruce in the studio, and in concert. I'd like to see Robin touring again with Livingston Brown on bass and vocals, and Pete Thompson on drums. Call it "The What Lies Beneath" tour. Robin has reached new heights of creativity on his recent album, which I believe, surpasses most of the music of "Seven Moons".

Posted by Ronnie Kerrigan at 21:53