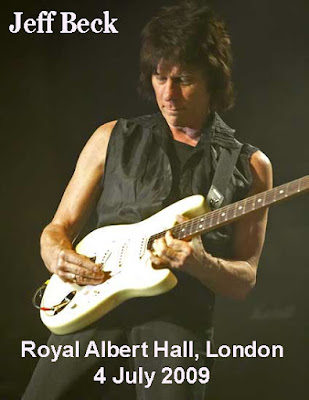 It is Sunday, 5 July 2009. The sun has come out and reflects strongly on the buildings, windows, buses, and cars below as I gaze from my hotel room. I'm interested to hear who Kirsty Young's castaway will be this morning on "Desert Island Discs". As I drink tea I'm pleased to hear it is the impresario and promoter, Harvey Goldsmith CBE - Jeff Beck's manager from January this year. I sit down and listen. As he speaks, it is clear he is knowledgeable, intelligent, determined, temperamental, someone who deals with conflicts and obstacles swiftly and effectively, and has a talent for organisation, and getting things done.

I am intrigued regarding his choice of music ranging from "Kasmir" (Led Zeppelin), "Baba O'Reilly" (The Who - his favourite 'live' band at their peak with Keith Moon), to the live version of " Nadia" of Jeff's amazingly, successful DVD/CD, Performing This Week - Live At Ronnie Scott's. His insights into the music industry, management, and the organisation of large-scale events proves compelling. Indeed, his passionate statements that Jeff Beck is a "genius," and that "... the artist has to change emotions inside you. Few musicians have this ability ..." are painstakingly legitimate.

Jeff Beck has become one of the most striking performer's in the history of the guitar. While he has played the guitar for several decades he continually seeks new ways to ply his art, develop, and renew his music. Indeed, his musical output, and guitar playing, is a delicate fusion of all the influences he has sought, explored, and absorbed. He is a guitar player with a "real" difference who tends not to sound bland. No easy task.
Jeff's return to The Royal Albert Hall has attracted fans from around the globe. Outside the venue I spoke to some people who had traveled from Sweden, Italy, and New Jersey. An exuberant, tribal gathering had come to secure Jeff's place as one of rock's genuine icons. Inside, the hall was packed to capacity; the audience murmured with expectation. I was fortunate to be seated in the eighteenth row with a clear view of the stage.

From the moment the band took to the stage, and began the whispered, rhythmic accompaniment to "Beck's Bolero" - Jeff entered "stage right" clad all in white, playing the melody on his cream and white strat - it was clear the sound was warm and mixed to perfection. Not as loud as in Belfast, but the band performed with incredible confidence, bar some momentary glitches. While Jeff's confidence is clearly at an all time high - long may it last - there were moments during the concert when Jeff - and fellow band members - appeared overly conscious and, to a degree, overawed by the intimacy and atmosphere of the occasion. However, an exchange of smiles, a flurry of nimble fingers, and drum sticks, restored calm, and once more the band scaled new heights of musical triumph.

The hypnotic rhythm to "Pump" made you want to clap your hands, stand up, and rush the stage. Not acceptable behavior at the venue, I'm sorry to say. However, the combination of Tal Wilkenfeld's bass playing and sound, combined with Vinnie Colaiuta's drumming was intoxicating. Then Jeff entered with his beautiful tone, melodies, and virtuosity which the rest of the group complemented, driving him to play licks that astound, confound, inspire, taking you on a beautiful journey.

A run of songs let Jeff and the band explore different rhythms and sounds which were a delight to the eyes and ears. From the achingly beautiful melodies and rhythms, of "Behind the Veil," "Angel," and "Nadia," to wonderful, intricate, drumming by Vinnie, the characteristic weaving of lines by Tal on her bass, overlaid with keyboard voicings by Jason Rebello, made "Space Boogie," and "Led Boots" alternatively sweet and nasty.
Sometimes the music appeared to be stretched in a particular direction - like an elastic band - to a point where it is about to break, then it turned, and retracted in another direction. Jeff continually displayed an ability to play with restraint and subtlety, without losing intensity.

Sometimes when Jeff plays the introduction to "Goodbye Pork Pie Hat" I wish he would play the full version as included on the Wired album, and play "Brush with the Blues" separately. Tonight belonged to Jeff and his band, and perhaps my preference for only "one guest" on stage was at variance with others in attendance. So be it.
After a great, fast, rocky version of "Blue Wind" the band was joined by Imelda May to sing "Lilac Wine," (a song written by James Shelton in 1950). In my opinion, however, Imelda does not possess the raw, haunting voice required 'live' to create the emotion and passion the song deserves.

The music Jeff and his band played tonight went beyond black and white. It contained a myriad of different colours and shades that danced and stimulated an engrossed audience. Jeff, Tal, Vinnie, and Jason bowed, and left the stage amid resounding applause, and a standing ovation. Tonight Jeff, and his band not only touched the hearts of the faithful, but - I believe - those witnessing them for the first time.

For two of the encores, Jeff and his band were joined on stage by David Gilmore to perform "Jerusalem," and "Hi Ho Silver Lining". Some fans speculated that Jimmy Page, or Eric Clapton, would participate at the event. In the end David Gilmore proved to be a good choice. Both guitarist's seemed to enjoy playing together, and while each has a distinctive style and tone, they proved inventive, and appeared to play their guitar's without effort. Jeff returned and played "Where were You". His performance was emotional and beautiful.

After the show I walked to the stage door where a considerable number of fans were waiting for Jeff to sign albums, CDs, DVDs, and other memorabilia. Most people seemed to be singing or humming "Hi Ho Silver Lining," while others' talked about the emotional and entertaining performance. I heard strands of, "How does he play like that?" Several fans took photographs of Jeff's set list I had acquired from the stage.
I was aware an "after-party" may be in progress to celebrate the success of the event for Jeff, the band, the crew, and organisers'. Needless to say, some fans had flights to catch in the middle of the night. I caught the bus to King's Cross, and made my way to Islington. As I walked, the breathtaking music from the concert flooded through my mind.
Jeff's Set List 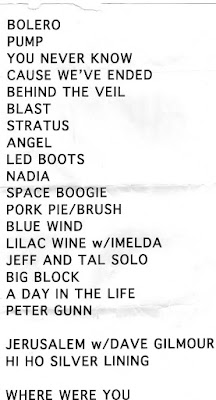 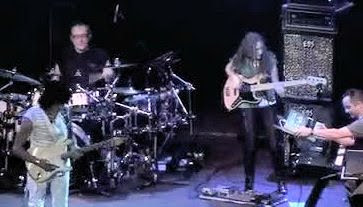 Blowing up a storm

I just happen to be the guy with the long hair and the white shirt center stage - the first to get out of his seat and go to the front before the encores. What a great night.
Posted by Ronnie Kerrigan at 14:41

I really enjoyed the concert. Thanks for the review, Ronnie.