The musical legacy of Robin Trower is equal to that of his musical contemporaries in the so-called “upper echelons” of blues and rock. Yet, I feel it has never been fully absorbed by the wider musical public for various reasons, which include, lazy musical journalism.

Time Out - London has the gig listed as 'Former Procol Harum guitarist headlines with his Hendrix-esque power trio.' See what I’m getting at? I believe Robin still possesses the creativity to create further great musical works, unlike some musical journalist’s whose mediocrity damns them to be forever a critic, never an artist.

After the mid -‘70s Robin’s earlier success in the UK seemed to take one step forward and two steps back – does anyone know the full story except Robin, and his manager(s)? – nevertheless, the music press continued to write album reviews and articles about Robin, but appeared to fail to hear or listen to the music. A primary requirement some musical journalist’s disregarded in their search for new [sic] talent to help sell their tired, once bona fide magazines.

There will always be musician’s who seek out and listen to those who make the most money based on imitation and copy it. Such musical careers are usually short-lived, as are those of the chroniclers’. Counterfeit music and playing, like counterfeit goods, are eventually exposed for what they are by the naked eye and ears.

Robin has been endowed with certain talents which happen to include being a truly creative guitarist and great songwriter. Just don’t expect the UK media to write or talk about Robin’s guitar virtuosity and the substantial catalogue of music he has compiled.I attended the gig tonight with my wife, Sylvia, and friend Bobby. It was dark and packed; the venue has a reasonable sound system and it’s a good place to see a band. Sylvia and I stood at the front and it was nearly impossible to move – Bobby made his way to the balcony where the vocals were clearer in the mix. 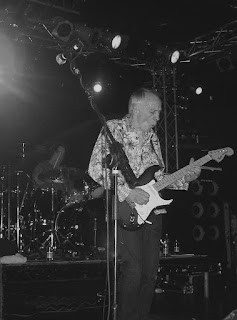 The set list was the same as the US tour and right from the opening of Twice Removed From Yesterday Robin, backed by Pete Thompson (drums), Davey Pattison (vocals) and Glenn Letsch (bass), played music that was beautiful, creative and, at times, breathtaking. It was difficult at times to hear Davey’s voice except on the slow songs but he sung his lungs out – I know, they landed on my head!

Robin’s guitar tone and playing tonight were sheer poetry - when he was really soaring you felt he was bearing his soul. Pete and Glenn provided a rock-solid rhythm section which give Robin space to ply his art. Tonight the fans were as one – a nest of singing birds echoing the lyrics flowing from the stage, monitors and PA. The set list didn’t include all the songs I wished for, or the coda of Too Rolling Stoned but it was still magical. Another great gig that will linger in the memory for a long time. 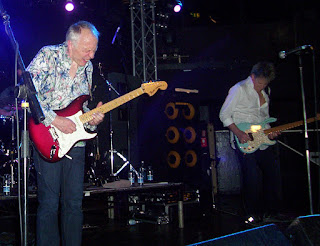 Thanks to Robin, Davey, Pete and Glenn for putting on a great show.After the gig Sylvia, Bobby and I went to the Coach & Horses in Soho for a few drinks. I asked them for their analysis of the performance. I just listened - and without revealing identities - the following comments were made:

* Dave Bronze’s bass style and fuller tone was sadly missed, and impacted on the sound.
* Glenn Letch’s bass style and funkier tone improved the overall sound of the band.
* Davey’s vocals at times were inaudible – maybe time for Robin to bring in a different vocalist.
* When the sound balance is perfect and the monitors are working Davey’s singing is good.
* Jimmy Dewar’s vocals sadly missed on Hannah Robin and the band played tight, and obviously enjoyed the warm reaction from the crowd.

We agreed that Robin's guitar playing remains remarkable, and pondered the success of lesser mortals who seem to have cracked the musical media code, and continue to build and maintain their careers and reputations on past glories. A great trick if you can pull it off, but maybe you lose your soul in the process?

Setlist: Twice Removed From Yesterday, Shame The Devil, For Earth Below, No Time, The Fool And Me, Roads To Freedom, Islands, Day Of The Eagle, Bridge Of Sighs, Rise Up Like The Sun, Victims Of The Fury, Gonna Be More Suspicious, Hannah, Little Bit Of Sympathy, Too Rolling Stoned, Go My Way Another Time Another Place. 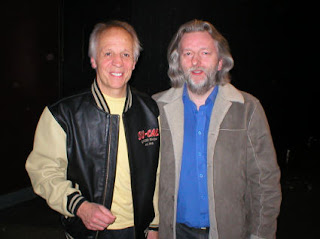 Posted by Ronnie Kerrigan at 10:06