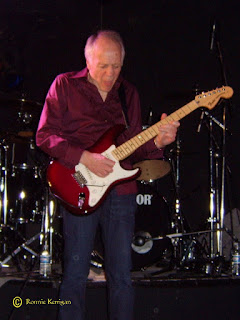 My brother, John, and I walked to Le Plan from our hotel – and believe me it was a long-distance trek. No-one we asked knew what we were talking about, never mind where the venue was. 'Look for the circus,' someone said. At least I think that’s what they articulated. Tired, weary and hungry we arrived in a rural area – I believe I saw a few cows, but they couldn’t speak English - then we found a modest sign for Le Plan.

A large crowd had already gathered at the venue. We decided to go into the bar as it served food! I stopped chewing on my shoe, put it back on, and asked a waitress for a table – ecstasy. We eat and had a few drinks. We didn’t go into the main venue until the support band finished, and Robin was ready to come on. The waitresses were hospitable ... shame to leave. The crowd, en masse, were captivated by the Robin Trower Band from the moment they arrived on stage until they completed their final encore. The small, intimate, dark venue made for a great atmosphere.

Tonight the Robin Trower Band definitely had ‘je ne sais quoi’ giving those privileged to attend ‘joie de vivre.’ The opening chords of Twice Removed From Yesterday confirmed the venue had great acoustics, and that the sound system & balance were perfect. Each member of the band could be clearly heard for a change; especially Davey’s vocals, which was a welcome change.

Some talented musicians’ grow into maturity and then decline swiftly or slowly. Robin isn’t one of those. While the set list was the same as the recent US Tour – mostly comprised of early works – there was no discernible loss in quality. Pete’s new drum set-up sounded incredible, and added a new dimension to the band’s sound. He sat enclosed by an array of cymbals, different drums, different brands, which he played with finesse - a pact with the devil maybe? Robin looked around at Pete a few times during the gig and smiled obviously attentive to some of the great touches Pete was adding to the music.

In New York it had been difficult to hear Glenn’s bass properly in the mix. Tonight, however, his bass playing was audible - the tone of his bass and technique perfect for Robin’s music. It was evident he was enjoying the gig as Glenn and Pete engaged in diverse grooves to complement Robin’s playing, and Davey’s singing.

The crème de la crème was Robin’s soloing in the coda of Bridge of Sighs. His playing at times varied between soft whispers and wailing screeches; all skilfully controlled highlighting Robin’s virtuosity. I just gazed in amazement and surprise. Breathtaking . . .

Davey was in fine voice throughout the concert (he could actually hear himself) which allowed him to concentrate on his delivery, and interact with the crowd. Throughout the concert the standard of Robin’s guitar playing and soloing was the best I’ve witnessed. He seemed to be playing with more passion than usual; if that’s possible to envisage, and the spiritual dimension that Robin and the band created on stage seemed to engulf the audience. 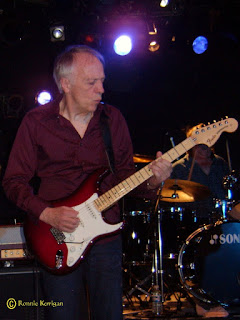 Robin’s tone was beautiful tonight, totally beyond description – he was using a RT50 Cornell amp combined with a Marshall - only Robin knows how he gets his tone. I love the spiritual dimension Robin is able to deliver in concert; it evokes the sweet, aching agony of nostalgia and a unifying joy that stirs your heart, soul, spirit – call it what you will. 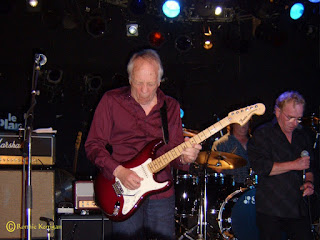 To summarise: Robin, Pete, Davey, and Glenn played their hearts out tonight, and showed they were - in terms of musical talent - par excellence.

Setlist: Twice Removed From Yesterday, Shame The Devil, For Earth Below, No Time, The Fool And Me, Roads To Freedom, Islands, Day Of The Eagle, Bridge Of Sighs, Rise Up Like The Sun, Victims Of The Fury, Gonna Be More Suspicious, Hannah, Little Bit Of Sympathy, Too Rolling Stoned,Go My Way Another Time Another Place

Posted by Ronnie Kerrigan at 18:54