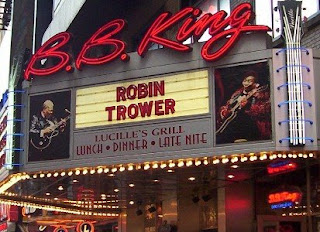 This concert will stay embedded in my memory for a long time. My visit to New York was fourfold: to see and experience the city; witness the Robin Trower Band in concert across the pond; attend a classical concert at the Lincoln Centre (Beethoven), and catch Woody Allen and his jazz ensemble at The Carlyle. I accomplished all four objectives and I’m still in aftershock.

As I collected my ticket at B.B. Kings mid afternoon I was pleased to be genially greeted by Laurie Brace, Road Manager/Sound Engineer for Robin Trower. Subsequently Laurie ensured I was given first class treatment before, during and after the concert, aided by his partner in crime, Steve ‘the Hat’ Russell, Backline and custodian of Robin’s guitars. Their generosity of time and thoughtfulness were, and remain, greatly appreciated. Not easy when setting up equipment, PA levels for the sound check, and making sure the band are content and their performance is as successful as humanly possible.

It was a pleasure to meet Neil Calandra for the first time after appreciating his photographic work, mostly through Steve Shail's site, and also Neil's friend, Ronnie. Laurie reserved a table for us facing Robin’s stage position which I didn’t expect and was grateful for; thanks again Laurie. A young guitarist called Jack joined us with his father (sorry I forget his name). Both had never witnessed the Robin Trower Band live in concert. After the show they confirmed they had been completely knocked out by the performance of the band, Robin’s guitar playing, and the pulsating atmosphere generated by the music.

Robin, Dave, Pete and Davey were extremely friendly and hospitable when they arrived for the sound check even though visibility tired. The travelling and gig schedule on this second leg of the tour can’t have been easy. The band played ‘Lady Love’ as Laurie adjusted the PA levels. I was surprised the levels set for tonight’s performance were lower than I heard on the recent UK tours. I thought Robin was keeping his guitar volume at about seven, even during soloing, to save extra volume for that extra punch during the show.

This wasn’t the case and during the actual performance the overall sound balance was first-rate with Davey’s vocals noticeably audible in the mix in conjunction with distinct bass sequences supplied by Dave Bronze and the drumming finesse of Pete Thompson. From the opening chords of ‘Twice removed from Yesterday’ it was evident the band had somehow regained their energy and I had caught them on a good night.

Without doubt Dave Bronze and Pete Thompson combine to provide a great rhythm section that compliments and inspires Robin’s playing; they know where Robin wants to go during his soloing and assist him in getting there. The band really hit home with an emotionally charged version of ‘Islands’. Robin playing melodic, soulful, bluesy charged licks and individually sustained notes that made you shiver; sheer genius . . .

Other highlights included blistering renditions of ‘Victims of the Fury’, ‘Too Rolling Stoned’, ‘Day of the Eagle’ and ‘Little Bit of Sympathy’. Robin’s solos highlighted his formidable vibrato, awesome string bending, tremendous guitar tone and the intense deep emotional feeling permeating his playing. Like the Chrysler building ‘Bridge of Sighs’ is a masterpiece; the former architectural, the latter musical, and any musician would be proud of creating and having this song in their set.

I believe songs like ‘Twice Removed from Yesterday’, and ‘Hannah’ cannot be replicated live without the warm soulful voice of James Dewar. The singing part of these songs is so important I don’t believe a singer exists who can come near. Yet, Davey's vocals are refreshingly unpretentious and exceptionally passionate.

It would be great to see this band tour again - UK and Stateside - and for Robin to consider a degree of flexibility with the set list, and include other great songs he has written or co-written, and that work live, for example, Alethea, Take What You Need (From Me), The Fool and Me, No Time, Over You (a personal favourite of mine: great chordal sequences, outstanding guitar solo, beautiful, passionate vocal by Davey, and incredible heart rendering lyrics by Dave Bronze); and where was "Living Out Of Time"?

Post show it was great to be invited with Neil and Ronnie backstage for some banter, laughs and hospitality with Dave, Pete and Davey. I told Robin it had been a great show and thanked him for handing me his guitar pick at the end of ‘Little Bit of Sympathy’. It had encouraged a guy at the next table to get the pick at the end of 'Daydream' for his son, who was also there to witness a triumphant performance by the band.

We were invited by Dave and Pete to their Hotel in the Times Square district, and as Neil Calandra said, “... for a night cap ... Nice way to end the night.” High-speed elevators shooting residents into the air, the sparkling furnishings of the hotel lounge, along with memories of the gig, music and guitar playing reverberated in my brain as I caught the uptown train at 4.00 a.m. Thanks to Robin, Dave, Pete, Davey, Laurie, Steve, Neil and Ronnie for a great night, their time and generosity, and making a tired and weary traveler come alive again with great music, repartee and genuine kindness.

Set List: Twice Removed From Yesterday; Hannah; Roads to Freedom; What’s Your Name; Islands; Day Of The Eagle; Bridge Of Sighs; Rise Up Like The Sun; Victims Of The Fury; Too Rolling Stoned; Go My Way; Another Time Another Place; Little Bit Of Sympathy Encores: Lady Love; Daydream.

Postscript: Caught Woody Allen and his New Orleans Jazz Band at The Carlyle the evening before I flew home. I used what was left of my Irish charm to get into the venue as it was sold out. The intimate atmosphere and the set list - which included New Orleans rags, marches and spirituals - was exceptional, a highlight at the end of the show was "I'll See you In My Dreams" song by Woody; not unlike the atmosphere created by "Daydream"; you could hear a pin drop. A memorable trip, indeed. 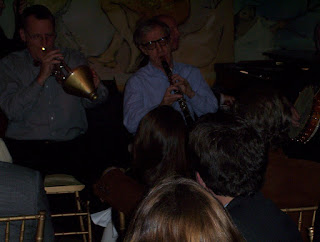