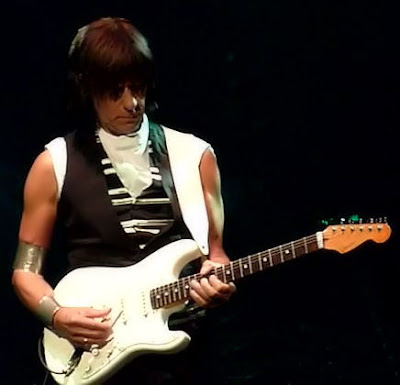 Concerts this inspiring don't come along too often. Some guitarist's flaunt their technical skill with fast playing, fast tempos, clichéd licks, have little interaction with their fellow-musicians on stage, and forget they are supposed to connect truthfully and emotionally with their audience. I see no point in grading guitar players as better or worse among themselves. The concept of who is/was the 'best' guitarist seems vacuous to me. All 'great' guitar players are born with a gift and I respect their genuine differences.

I guess Jeff's music and playing has a deep meaning for me and makes a genuine difference to my life; similar to other musicians I admire. Tonight, Jeff and his band exceed my expectations and give a performance rich in sound, delivery, creativity, emotion and inventive agility. When you watch and listen to Jeff playing live you hear each note he plays, the melody, the music. He constantly moves about the stage as if searching for fresh inspiration, new sounds.  His movements fixate the audience's attention. Tonight, Jeff shows breathtaking dexterity on the guitar in a wide range of musical styles. His excellent band never waver during the performance; kicking rhythmically in unison on each song while highlighting their individual artistic prowess. 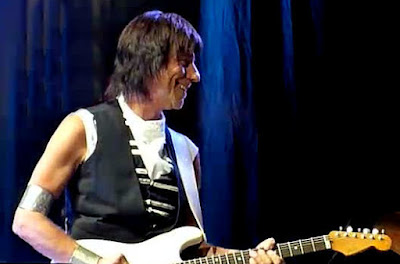 From the opening track "Plan B" of the Jeff album (2003) it is evident this concert holds no false promises. The sound balance and Jeff's guitar tone are excellent. Also apparent is Jeff's willingness to give his group room to highlight their exceptional individual musicianship. When "Plan B" fully kicks in - an electronic, funky, haunting mix of beauty and steel - it enables Jeff to fire his powerful turbine of riffs over Rhonda's powerful, funky, bass lines, Narada Michael Walden's colourful, intuitive drumming, and Jason's exceptional, rich-sounding keyboard playing.

"Corpus Christi Carol" was as captivating and atmospheric 'live' as on the Emotion and Commotion CD, which didn't surprise me. What surprised me was that it didn't seem out of place on the set list. In fact, it sounded simultaneously mysterious and wonderful. If you were still enough, and concentrated on the music, the musicians, you felt part of it. A magnificent tenderness. The mood takes a powerful turn when Jeff hits the wah-wah pedal for the intro to "Hammerhead", a track that burns with passion, amazing soloing over hypnotic rhythms and riffs. Magical music with power and energy.

Jeff's rendition of "'Mná na h-Éireann" (Women of Ireland) composed by Seán Ó Riada, was moving and breathtaking. Jeff's soloing, on this song, was one of the highlights of the concert, as was Rhonda's bass solo. I prefer the 'live' version without violin. It felt, to me - and the audience, by their reception at its conclusion - that Jeff and the band delivered a haunting, evocative, and unforgettable version of the song. Truly wonderful.

Rhonda performed a stunning bass solo which included harmonics, bending the strings behind the nut of her bass guitar, hitting (caressing?!) its body, finger tapping, string bending, and then getting into some serious, eloquent, and powerful funky bass playing which had the crowd totally enthralled. Rhonda's playing was formidable and sexy. Am I allowed to state that? Hell, yes. Perhaps you should be over a certain age to witness Rhonda's compelling stage presence and musical talent! 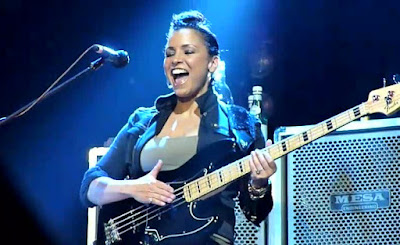 Tonight, the music range is wide; embracing everything from blues to funk to jazz to classic British rock, and much more. The band play a wonderful version of "People Get Ready" and the vocals aren't missed. In fact, Jason plays some wonderful keyboards in the outro section of the song which create a strong groove. Then the concert goes up another notch; this time with a great version of "Big Block". Jeff's guitar soloing - alternating between light and shade - reaches a different level. In the hands of a master his guitar wails and sings with melody, riffs, single notes, harmonics, finger tapping, volume swells, whammy bends, and most of all, feel.

"Brush With The Blues" lasts for about five minutes and is a complete masterclass in how to play music that connects with an audience, and why Jeff deserves to be placed high in the canon of musical geniuses. He plays with a lyrical beauty, spirit, and charisma that few guitar players, at present, can hope to reach.

The slow tempo of ""A Day In The Life" sounds rich, textured, melodious, and is a revelation - full of character, magic, exhilaration, sadness. Music that lingers in the memory. (Is that "Purple Haze" I hear? Is that a tribute to 'Jimi at the Monterey Pop Festival' at the end of the song?). John Lennon composed the beautiful, memorable song, and Jeff has reconfigured it to be heard in a different, and perhaps, for some, in a more powerful way.

﻿Jeff and the group deserve the boisterous standing ovation at the close of the set. During the encores they preform a rousing, energetic version of "I Can Take You Higher" which highlights Rhonda's talent as a vocalist, as well as a musician. Jeff and the group are joined on stage by the leader of the support act, "Trombone" Shorty, which helps create a party feel. Jeff then pays tribute to the late "Great" Les Paul by adorning a Les Paul guitar and playing a rendition of "How High the Moon". Jeff and the group play in sync with a pre-recorded vocal tape. I believe the recording featured the vocalist, Imelda May.﻿ 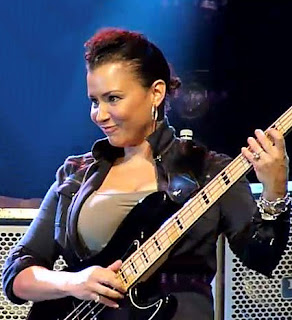 Jeff reaches for his white, fender stratocaster and plays a beautiful, haunting version of "Nessun Dorma". He may not have played the songs everyone wanted to hear tonight, but no-one was left in any doubt they had witnessed an incredible show. A show performed by an outstanding group led by one of the greatest guitar players of our time. Music and guitar playing which tends to stay in the memory for a long, long time afterwards. 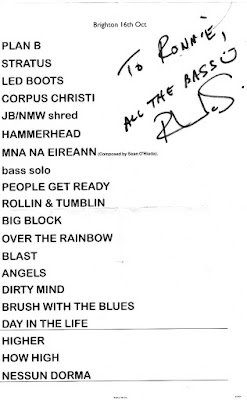 Postscript: Even though it was freezing outside the venue I'd like to thank Rhonda Smith and Narada Michael Walden for taking time to talk to fans outside the venue and signing memorabilia. The following photograph didn't come out as I hoped. I believe it was too cold and the flash decided not to work properly! It is still a good photograph and a great memento - along with the set list - of an outstanding concert. 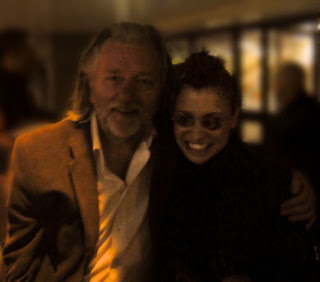