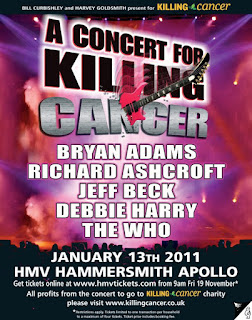 A charity fund-raising concert will be held at the Hammersmith Apollo, London, on 13 January 2011. The current line-up includes The Who, Jeff Beck, Richard Ashcroft, Debbie Harry, and Bryan Adams.

The event is being organized by promoter Harvey Goldsmith and Bill Curbishley, manager of The Who and Robert Plant. The concert will raise funds to benefit the Killing Cancer charity, specifically, to raise awareness of Photodynamic Therapy (PDT).

The inspiring commitment and generosity of those involved in making the event feasible - Harvey G. and Bill C., the artists, the Hammersmith Apollo, and others - are to be warmly applauded. Their vision and passion will ensure valuable funds are raised for cancer research.

I am attending the concert and hope to write a review.