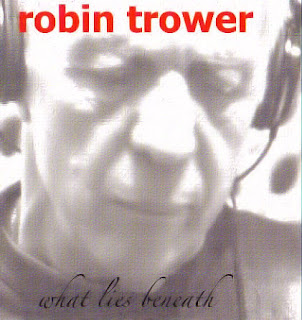 Some musicians are excellent: some are outstanding. Robin Trower belongs to the latter category. During his long solo career Robin's feel for melody, musicality, passion, and rhythm has not deserted him. Despite decades of successful achievements - on record, and in performance - this album confirms he is still capable of searching for new and challenging musical horizons while retaining his own trademark sound.

The addition of strings, in particular, the cello, on some of the tracks give a a tonal warmth which is immediately appealing. The cello touches the heart and soul in ways other musical instruments are denied.

The qualities that make Robin's music an art which cannot be imitated - and shine throughout this recording - are its rhythmic pure sound; its warm, polyphonic textures; and, of course, Robin's mastery of the guitar: tone; chord inversions/extensions/voicings, vibrato; phrasing; melody; string bends, feedback, whammy-bar, improvisation, wah-wah, and feel.

01. Wish You Were Mine (instrumental)

A 'classic' hypnotic rhythm overlayed with Robin's warm guitar tones, feedback and whammy bar create an opening track of ethereal beauty. The interplay with strings (cello/violin) is captivating adding to the celestial mood.   The lead which kicks in at 1:37 is Robin at his finest.

The wah-wah introduction (its use throughout) and the recurring bass riff and sound give this song a solid depth and structure. After repeated listening Robin's voice suits this song, and most songs on the CD. At times, his voice sounds smoky, husky, conversational, but always impassioned, sincere.

Beautiful intro. Great melody interspersed with lyrical fill-ins. At 1:56 a new dimension is reached. The rich tapestry of sound is enhanced by the strings, and Robin's soloing and layered guitar parts. The tone of a strat never sounded better.

The plethora of sounds, guitar parts, bass, and drums combine to make this a instrumental a joy. Full of creativity; great arrangement. Magical.

This track sends shivers up and down my spine from start to finish. The tone of the main guitar is intense and powerful. The blend of Robin's vocals, the melody, the arrangement, bass and drums, combine to produce a classic track. Love the backing vocals ... Astounding.

06. Once The Spell Is Broken

A song that contains a plethora of sounds including organ. The combination of a strong melody and a wonderful outro solo makes this one of the best songs on the CD. Moody and ambitious; amazing chorus.

07. Sleeping On The Moon

Don't be fooled by the calm start to this song. Out of the calm comes a strong, passionate chorus (great harmonies). Then it goes up another gear when Robin breaks into incendiary solos at 1:36 and 2:34. Love the groove on the outro solo ...

The organ and Robin's melodic guitar riffing and chord embellishments combine to make this a wonderful, atmospheric composition. Robin solos using all the techniques he has perfected since he started out as a professional musician. A sweet and passionate track.

A track that appears to be going in one direction and takes different paths. A well-structured song with strong soloing. Great tone and Robin seems to be enjoying himself. The change at 2:10 makes for a welcome fade out were Robin is firing on all cylinders. A sound to behold, indeed.

The blues has played a large part in Robin's musical career and songwriting. This catchy, blues-driven instrumental - supplemented by organ - gives Robin the opportunity to play the blues as only he can. Some sweet lines and bends; seamless playing with incredible tone.

The chord voicings make this one of the best tracks on the CD. Robin's guitar parts are inspirational and melodic throughout and create a wonderful sound. A strong verse and chorus make this a great song. Robin's vocals sound completely in sync with the music. An exceptional closing track for the CD. Breathtaking outro.


Further details about What Lies Beneath at Amazon and trowerpower.com