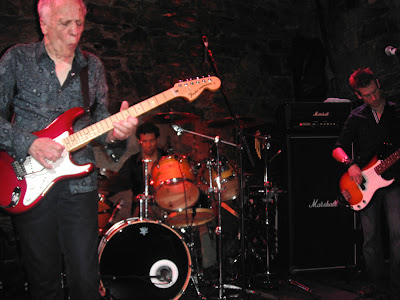 Some artists sound much the same from one gig to the next; playing songs 'note for note' as per the recorded versions. With Robin (as with Jimi Hendrix and Rory Gallagher, whom I both still idolise) no two concerts are the same regarding the length of songs and instrumentals, or the level of colour or mood they radiate to the audience. Robin's playing remains fluid, improvisational, and each concert represents a concert without precedent.

Tonight Robin is playing The Caves: a venue hard to find, but once you do, is truly an amazing place. The fact it is underground, a windowless cave with low lighting, brick walls, make for an intimate atmosphere, ideal for music, live or otherwise. The low stage, however, can make it difficult for some fans to see the group properly during the performance. Robin is joined on stage tonight by Richard Watts (bass and vocals) and Chris Taggart (drums). 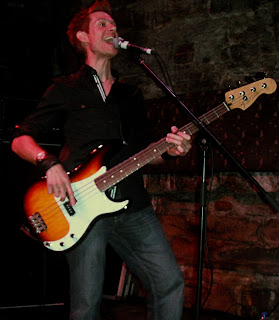 From the opening number "Confessin' Midnight" I'm pleased to see how each musician commands the stage, and unify to deliver powerful, emotionally expressive, fresh versions of some of Robin's greatest songs. Robin seems genuinely delighted to be performing with this line-up, occasionally lighting his face with a warm smile. As Robin feeds of the response and affection of the audience I'm sure there are moments tonight when he feels overwhelmed.

On "Lady Love" Richard's vocals confirm he has progressed to be a strong, dynamic singer. He sang the lyric with total conviction; a blend of passion and freshness, while delivering a deep, strong bass line. Some of the audience - including myself - felt, at times, Richard's bass was too low in the mix. The energy level of the band, however, was high and they delivered expressive, inspirational versions of "Somebody Calling" and "For Earth Below." Richard and Chris creating deep, rich grooves for Robin to play his guitar with freedom, imagination, and in his own phenomenal style. The band played a song I haven't heard before: "When I Heard Your Name" which confirms Robin remains a prolific, creative musician. 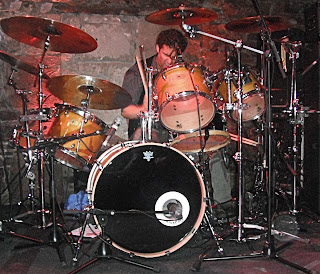 Chris Taggart is a revelation on drums, adding colour, texture and driving rhythm grooves which weave into phrases that create a rich, colourful backcloth that Robin can solo over with intense creativity. His cymbal work is an integral part of his fine and subtle performance. The musicianship of Richard and Chris combine to provide a new dimension and sound to Robin's music; creating an hypnotic, spellbinding atmosphere.

Some fans are perturbed and mystified to find that Robin is playing tonight with a new rhythm section. Personnel changes - especially in a trio - can blend to create a change in musical colours, expressions, patterns, and make it sound completely fresh. The overall impression is that this rhythm section are perfect for Robin at this time, and he is clearly inspired by the new combinations of sound. Meanwhile, only Robin knows what the future holds regarding his musical direction, and the musicians he will use to bring his creative ideas to life. 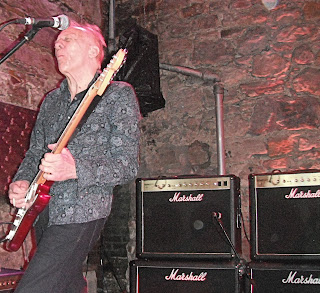 ﻿
Robin's set list tonight confirms he prefers to play the old songs, but in the studio he continues to record an extensive range of fresh material. During the last three years he has released three CDs: Seven Moons (2008), What Lies Beneath (2009), and The Playful Heart (2010). Of the three recordings I believe What Lies Beneath is a true "Classic". Each fan has their favorite Robin Trower albums and tracks. I would like to see Robin revolutionize his set list by including songs such as: 'Into Dust', 'Blue For Soul', 'This Old World' (great riffs & vibe), 'Living Out of Time' (a classic track), 'I Can't Wait Much Longer' and tracks from What Lies Beneath. 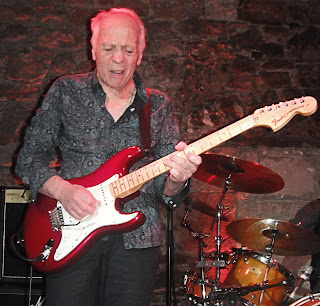 Robin, Richard and Chris play a rousing version of "Day of the Eagle" which flows softly into "Bridge of Sighs". At times, I close my eyes to listen to the music flowing from the stage. Whether mid-tempo, or slow, it sounds unified, fresh, spiritual, mood altering. As if time has slowed down. Richard's vocals ring out throughout the venue, and the sound of the guitar, bass and drums pulsate, weave patterns, and make that vital connection with the crowd. While I believe "The Turning" is a good song the change to a slower tempo at the coda doesn't enrich the composition. In fact, it negates the intensive flow and driving rhythm the song generates in the first place. The song still goes down well with the crowd.

Someone asks me tonight why Robin's music affects me the way it does? Simple words can't describe the feelings one gets when one finds music that really matters to you, whether it is recorded or live. Robin's music and guitar playing remain embedded in my mind to be accessed when needed; still touching and moving me today as much as yesterday. Long may Robin continue to compose songs and music of substance, record, tour, and reach people with his musical talent. 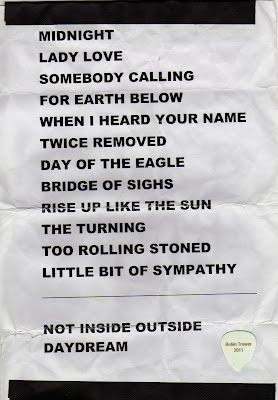 There's definitely a strong case for Robin to tour the UK/Europe & US in 2012 with this line-up (other commitments permitting). They are engaging, lively, superb musicians. In conversation with fans (post concert) most agreed tonight's concert had been a revelation; that Robin and his band looked and sounded energized, driven, and give a high octane performance. In essence, the stage pulsated with talent tonight, and credit is due to Robin, Richard and Chris for their contributions.

After the concert it was a pleasure to meet "long-time" Robin Trower fan Davy Smith again; Laurie Brace (Road Manager/Sound Engineer for Robin Trower), Chris Taggart, Robin Trower's drummer, and other Trower fans whose names I unfortunately forget. The conversation was memorable as was the concert. The talents of the late Jimmy Dewar, Davey Pattison, Pete Thompson, Dave Bronze, Glenn Letsch, the late Rory Gallagher (and other musicians) brought forth fond memories of gigs in Belfast, Edinburgh and Glasgow. Also, favourite songs and albums. A wondrous night, indeed.

Flats for Sale in Edinburgh

Use this article to increase your knowledge . cara menggugurkan kandungan

I really enjoyed your blog Thanks for sharing such an informative post.
clipping path
raster to vector
background removal
ghost mannequin