Robin Trower is an engaging musician and guitarist much undervalued in his own country. His music is direct and soulful in its intensity, especially live. Robin creates a lyrical, ethereal sound quite unlike any other guitarist alive or dead. Frankly, the constant comparisons of Robin's guitar playing and music to other musicians is damn tiring to read never mind listen to. The comments and prejudices expressed by mulish music critics, reviewers and music aficionados about Robin Trower's solo work are depressingly predictable. I see no point in grading musicians and guitarists as better or worse among themselves. I respect their genuine differences. Even at their least successful, the music created by a musician may be admired and have deep meaning to the listener.

It takes great physical, emotional and spiritual stamina to sustain a successful career through each different phase, each new studio album, and to continue to reach listeners and inspire other musicians. Robin Trower remains one of the most gifted electric guitar players of the twentieth century and thankfully he is still creating music and playing in performance today. I hope, and suspect, that someday Robin Trower's music and guitar playing will receive the recognition it genuinely deserves.

This summer Robin, with Chris Taggart on drums and Richard Watts on vocals and bass guitar, will be on tour in the USA starting with a concert in Tulsa on 2 June culminating with a gig in Seattle on 3 July. I'm sure the atmosphere at each concert will be highly charged with expectation and emotion. Also, that Richard and Chris will provide the perfect musical backcloth for Robin to solo with his unique guitar style and sound. I admit to disappointment, however, that the set list for 'recent' tours has remained virtually unchanged. It would be wonderful if Robin showcased other songs from his extensive musical catalogue in live performance. One of the great pleasures over the last decade has been the inclusion of songs from diverse periods of Robin's career which have invigorated his set.

The variety and range of musical output by Robin Trower from his earliest work to the latest album, Something's About To Change, is to be admired for its spirit, soulfulness and quality. In interviews when Robin comments on his studio albums, long after they've been released, he acknowledges that some albums fall short of his own vision and artistic expectations. Each person has their own long-standing favourite Robin Trower albums and tracks. While I believe that some of his albums are uneven in quality, and contain songs which sound repetitious or simply vapid, I'm always pleasantly surprised by the magic generated by some of Robin's new material. The lyrics, music and guitar solos tend not to get lost and lie ingrained in the memory. 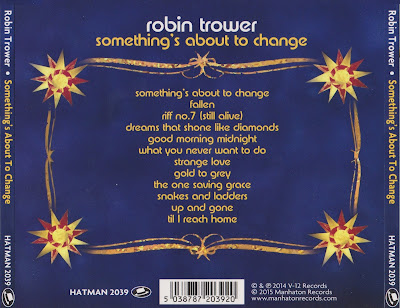 The title track 'Something's About To Change' opens Robin Trower's new album. The atmosphere and sound is Robin at his best. The drums and bass create a hypnotic "cooking" rhythm and the song contains Robin's best vocal and guitar soloing on the album. The song provides a great build-up to Robin's first and second solo where every note is made to tell. The brooding spirit of the blues, and Robin's airy, soulful guitar hang over the entire track. I wish the second solo had lasted longer and the track listing had been edited to exclude two or three of the undistinguished songs on the album.

'Riff No.7 (Still Alive)' is lyrical and funky with a tight groove. The changing chords and phrases build the tension and, once again, Robin's tone and soloing is excellent but way too short (track length 3:11?!).

'Dreams That Shone Like Diamonds' has a potent and subtle emotional resonance. The chorus is haunting and memorable, catchy, reflective. The verses are mostly spoken by Robin Trower like a kind of prayer and the track contains some of Robin's most moving and eloquent playing.

'Strange Love' has a slow, flowing groove. Robin's vocals are gentle, yet passionate. His lead guitar shines on this song with extraordinary lyricism, feeling and spirit. Memorable lyrics.

'The One Saving Grace' has a more pronounced sound than the other tracks on the album, except the title song. The drums and percussion have a more solid feel and Robin whips up the tension with his soloing. Robin's guitar tone is breathtaking and his playing is poetic and passionate (track length 3:06?!). Another song that deserved a longer solo and fade out. In terms of the overall sound of the album - dynamics, rhythms, performances - the inclusion of a talented and expressive bass player may have radically changed the pedestrian feel of some of the songs and added new and intense dimensions.

The beauty of great (perhaps good) music is that you can listen to it many times with added pleasure, similar to rewatching a movie or rereading a novel. If Robin Trower's music continues to touch your mind and heart you are on a passionate and rewarding venture.